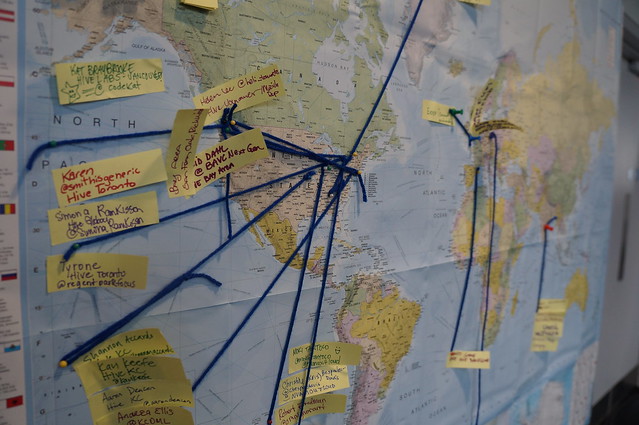 As we’re coming towards the end of our preliminary fieldwork phase to get a snapshot of Hive NYC, we’re starting to see that member organizations “interface” with the Hive in very distinct ways. For example, we’re noticing that in a number of larger organizations, the relationship to the network and its associated opportunities is managed by one individual within a specific programmatic department, with development (i.e., fund raising) folks coming into the picture when the organization responds to a Hive RFP. In some smaller ones, we’ve seen a range of set ups, from executive directors being the only one in the organization that even knows what Hive is (common with some of the newer small organizations), to others where teams that span leadership and programmatic roles attend Hive community meetings together. In still other cases, we’ve seen “hand-offs”‘- an instance where someone moves on from a position and was a “point person” to many Hive-affiliated relationships and activities, and then moves out of that role, explicitly giving it to another person in the organization.

This brings up the fact that there are so many things that we might count as an “interface” with the network (and what the network actually *is* from an analytic perspective is a whole other post). Any of the following might qualify:

So why does this all matter? Well, as a project that’s studying the way that Hive NYC can improve its ability to be an infrastructure for innovation, knowing how each member organization interfaces with the Hive becomes really important because it gives us insight into a range of related questions. Who’s bringing ideas and technologies into this community? How does organizational interface mediate who participates in the broader Hive NYC community and who doesn’t? How do innovations travel within and across organizations based on the nature of that organization’s interface? How does an organization’s knowledge and understanding of the Hive NYC community and its ethos, values and educational approaches change over time depending on how it interfaces with network activities? All of these questions are consequential to the broader goal of supporting Hive as a context for educational innovation, and so we’re paying close attention to these issues in the ground.

One of the questions we’ve asked some older Hive NYC members is if there are things they’d recommend to new Hive member organizations. One member recently spoke directly to this point of organizational interface, saying that he felt it was critical that an organization find a Hive point person (or people) who is both really interested in the network and the ideas that are associated with it and at the same time has some degree of power to capitalize on that participation and the opportunities that stem from it in a way that benefits the broader organization. Adding to that point, another member recently mentioned that while she’s the active liaison now, that’s a role that someone else (originally from their development department) used to occupy, and it gradually shifted as it became clearer to the organization that Hive NYC was not just another funding opportunity but rather largely about educational practice, and that from that perspective having a programmatic-oriented staff member engaging made good sense.

There’s plenty more than we’re finding about this issue, but I thought I’d take the opportunity to open this question up for any Hive members that might be reading (folks from other Hives aside from NYC are welcome!). How does your organization “interface” with the Hive? Are there recommendations you have for other orgs about what’s worked for you, or what hasn’t? And what are the things you consider most as you’re making these sorts of decisions?